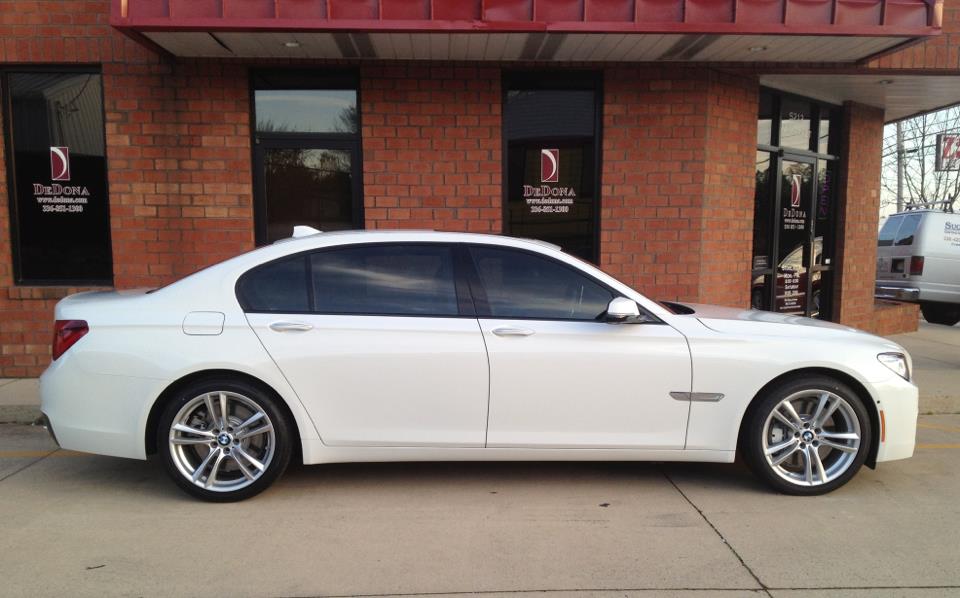 We have been tinting windows for close to 20 years now, and our customers’ tastes are as varied as the types of tint films we have available. Some want a cheaper tint and a darker look, others want a more reflective look, and some want a more subdued, subtle look. The appearance of the tint, as well as its function, is entirely dependent on what type of film we apply to the glass, and there are several to choose from. We’ll go into a little more detail about each type of tint film and the results you can expect.

Dyed Film
The cheapest option is dyed film, which as its name implies is simply a film containing a dyed layer (no metal) that provides a dark look for privacy, coupled with excellent heat absorption properties. You may suspect that since this film absorbs heat the interior would actually get warmer, but instead the heat absorbed by the film is transferred to the glass, then dissipated outward with the movement of air. Drivers who want an extra dark look on a budget often favor dyed film.

Metalized / Deposited Film
Metalized tint film gets its name from the extremely thin metal layer within the film. This metal layer results in the tint being somewhat reflective while having exceptional heat rejection and blocking UV radiation. These films are made by vacuum coating a layer of metal onto polyester, then a clear laminate is applied to protect the metal. These are then sandwiched between an adhesive layer and scratch coat to create the final product. This is a thicker type of tint film, so applications may be limited depending on the vehicle or particular piece of glass. Once applied, the result is typically a darker, more reflective tint. Some films combine dye and metal to tone down reflectivity and give glass a “smoky” look. It’s worth noting that this type of film has been known to interfere with GPS and radio signals in some cases.

Sputtered Film
This film is similar in some ways to metallized film, is also created in a vacuum chamber, but is much lighter and thinner which makes it easier to apply and more versatile. Sputtered film results in much more subdued reflectivity and minimal color shifting. This type of film is not exceptionally good at rejecting heat, but it blocks UV radiation exceptionally well.

Hybrid Film
Hybrid films bring metals and dye together in a single application. By combining the two, many of their benefits are retained while dropping some of the drawbacks. A common misconception is that the darker a tint film is, the better it rejects heat, but for hybrid film that rule doesn’t apply. Hybrid films are capable of achieving very little in the way of reflectivity but still brighter despite the dyed film layer that rejects a large portion of outside heat.

Ceramic Film
Ceramic tint films are the crème de la crème of the industry, and while not offering quite as much privacy as dyes films, ceramic film delivers the goods in every other way possible. In this case, metals and dyes are put to the side in favor of state-of-the-art ceramics to create a film that retains its precise color and appearance for many years. This film rejects the vast majority of heat-producing infrared light (which you can’t see) and almost two thirds of outside heat coming through the windows, in addition to blocking up to 99.9% of the sun’s harmful UV rays that cause damage to your skin and the vehicle’s interior. Ceramic tint does not impede your ability to see while driving at night due to its outstanding optical clarity.

Factors to consider
When choosing a tint film, it’s important to consider what aspects of the window tint mean the most to you. Visible Light Transmission (VLT), an acronym you may already be familiar, represents the percentage of visible light visible through the glass. Darker tint can reduce glare, but a balance must be struck between glare reduction and optical clarity (your ability to see out from inside).

Reflectivity is also a factor to consider. Some people prefer the black or matte look, while others may tend toward a film that provides a more reflective, mirror-like appearance. Almost any look can be achieved with the types of film listed above, it’s just a matter of deciding on one specific type that has the best combination of appearance and capabilities you’re looking for.

No matter what your personal taste may be, the experts at DeDona Tint & Sound can help you choose the right type of tint for your vehicle. Request a free quote directly through our website, or call us at (336) 851-1300 to request a quote or appointment. We’re here to help!