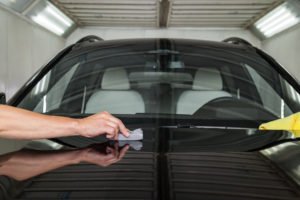 The windshield is an essential part of your vehicle. Not only does it provide protection from inclement weather and debris kicked up from the road, it also plays a role in strengthening the vehicle by providing structural support.  Made of laminated safety glass, the modern windshield is a precisely engineered component that is designed to hold together when broken or crushed, preventing injury to occupants.

At first glance, windshields appear to simply be a large piece of glass, and that is partly true. What you are actually seeing are two pieces of glass sandwiched together under heat and pressure during manufacture, with a layer of polyvinyl butyral in between (called the interlayer).  The high strength of the glass prevents it from breaking into sharp or jagged pieces while the interlayer holds the glass in place, creating the web-like cracking pattern when the impact is not strong enough to puncture the glass.

Once the panels of glass and PVB are joined together under heat and pressure, they form a single high-strength panel that is optically clear. PVB is a tough and ductile resin, which means cracks in a glass panel on one side of it will not pass through to the other.

While the glass panels themselves are quite strong, a large amount of a windshield’s strength can be attributed to the PVB resin that bonds the glass together.

Surprisingly, PVB has been around since the 1930s as has been a commonly used material for windshield production ever since. Only minor modifications have been made since then; the PVB used today is essentially identical to that used 30 years ago.

Another interlayer material commonly used in the production of laminated glass for windshields is thermoplastic polyurethanes (TPU), which also has high elasticity and transparency.

From Raw Materials to Finished Product

As you might imagine, the process begins with molten glass. The main ingredients of glass, which include silica, sodium, and calcium oxide, are measured by the batch, melted down and then fed into a float chamber which contains a large volume of molten tin. The temperature of the tin is hotter near the entrance and cooler near the exit. The molten glass is fed into this float chamber, and is not submerged but instead floats on the surface of the molten tin, moving slowly along the tank like a conveyor belt.

Because the surface of the tin is completely flat, the glass flattens as well as it moves through the chamber, and the high temperature removes impurities from the glass as it moves along. The lower temperature near the end of the chamber allows the glass to harden slightly before entering the furnace (kiln).

After exiting the float chamber, rollers guide the glass into a special furnace called a lehr (any solar coatings which may need to be applied are done so before the glass is moved to the lehr). The temperature in the furnace is then slowly lowered to around 200 degrees Celsius, after which the glass exits the lehr and cools all the way down to room temperature and is ready to be cut.

At this stage, the glass is now cut into the desired shape using a diamond scribe, which is a tool with sharp metal points that contain diamond dust. The scribe tool cuts an outline into the glass matching the required dimensions, and the glass is then trimmed to match the online using an automated process using precise factory robots.

Most windshields are not perfectly flat, though, which means the glass now needs to be bent into the right shape. This is accomplished by placing the windshield in a mold, and the glass is then heated just enough so that it sags to conform to the mold. Immediately after this process, the glass must be hardened (a process called tempering). The glass is quickly heating to an astounding temperature of around 850 degrees Celcius, then immediately blasted with cold air, which rapidly cools it down and toughens the glass because of the external compression and internal tension.

Now that the glass has been cut, molded, tempered and cleaned, it’s time to laminate. To kick off the process, two panels of glass are bonded together with a resin (known as the interlayer) in a specialized unit called an autoclave, an oven that uses both heat and pressure to transform the “sandwich of glass panels and interlayer material into one solid unit. The final product is thinner than you may expect, with each glass panel just under a tenth of an inch thick, and the interlayer only .03 inches thick.
Now that laminating is complete, the windshield is now finished and ready to be sent off for installation in a new vehicle.