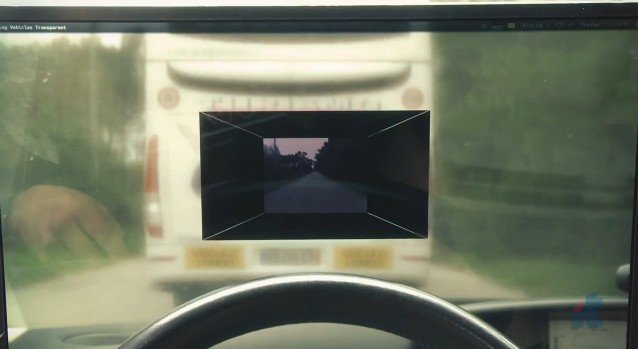 No one enjoys being stuck behind a large and slow-moving vehicle on the highway, especially a two-lane road where mobility is limited. Not only do these lumbering vehicles often slow you down, they are difficult to see around and that makes passing much more hazardous. Drivers are also forced to increase their following distance between these vehicle to get a better picture of the road and to allow enough distance for hard braking if needed.

A new system developed by Professor Michel Ferreira and his team from Portugal’s University of Porto could evolve into a solution for this problem – an augmented reality system currently being called the See-Through System. This technology lets drivers “see” right through the vehicle that they’re following with the use of forward-facing cameras transmitting directly to LCD displays on drivers’ windshields.

For this system to function, large vehicles like semi-trucks and buses would be equipped with a forward-facing webcam on their windshield. Other smaller vehicles on the road like cars and trucks would have a transparent LCD screen built into their own windshield. When a driver gets stuck behind one of these oversized vehicles, they will have the option of wirelessly receiving a live video feed from its windshield camera. The transmitted footage is displayed on the car’s windshield LCD in such a way that it lines up with the actual through-the-glass view of the back of the larger vehicle. Effectively, it appears to open a window through the vehicle ahead through which the driver can see. This will allow trailing vehicles to see if anything is directly in front of the large rig, or if there is any oncoming traffic to watch out for when passing.

Now, this technology is far from perfect. The system has been tested in both a driving simulator and on an actual vehicle traveling on the road, however while it shows promise there is currently too much lag time in the video feed for it to be effective. It takes about 200 milliseconds for the video footage to transmit and display properly, and with that kind of delay in video transmission it’s enough to make an oncoming vehicle appear 10 meters farther way than it actually is if both vehicles are going around 55mph. Once the video transmission delay has been resolved, this could become a great way for drivers to always be able to see beyond the big rig in front of them.

Cost is a serious hurdle with something like this, though. For the See-Through System to break into widespread adoption and be truly effective, millions of vehicles would need to be outfitted with forward facing cameras or windshield LCD screens capable of displaying the video feed.

The See-Through System has been in development since at least 2010, although it gained new attention when it was presented at the International Symposium on Mixed and Augmented Reality this month in Adelaide Australia. See below for a video demonstration of the See-Through System.